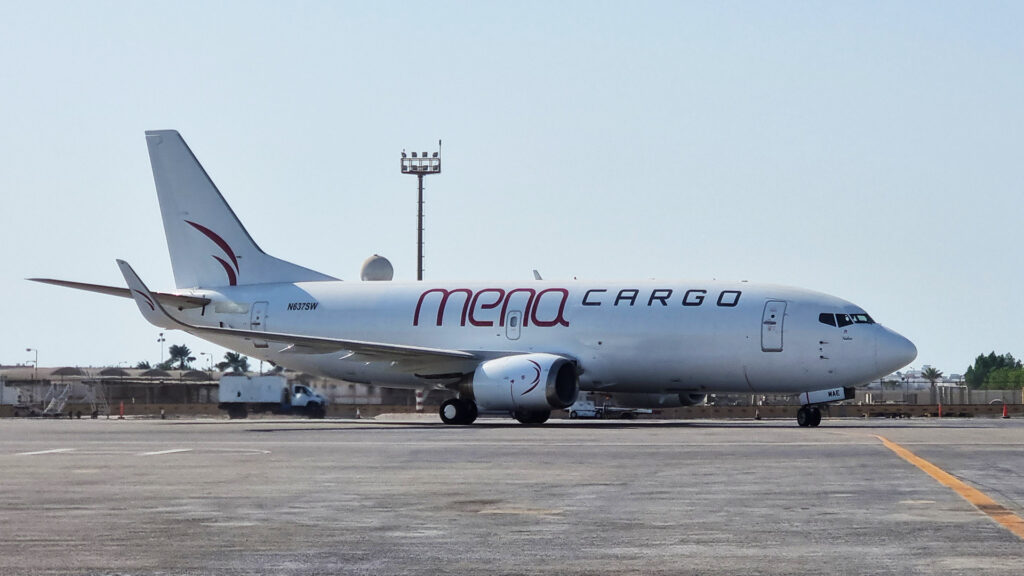 The pivotal cargo partnership agreement was signed at the Bahrain International Airshow, by ACN Group CEO, Marco Isaak and Founder and Managing Director of MENA Aerospace, Dr Mohammed Juman. Under the agreement, ACN plans to base six of its cargo planes in Bahrain and the GCC where it will serve the market in the MENA region as well as cargo routes into and from it.

ACN will be a shareholder with a 49% stake in MAE Aircraft Management WLL with this significant FDI investment into Bahrain. The investment consists of capital, asset deployment, management services and expertise. The partnership facilitates expansion and growing global reach of cargo services beyond Southeast Asia and the Middle East.

ACN’s Group CEO Marco Isaak remarked, “We’re incredibly proud of this historic milestone for Asia Cargo Network as we expand our operations into the MENA region. Our partnership with MAE is a testament to our commitment to excellence, and we look forward to cementing our reputation as a strong global player in the industry.”

The deployment shall be over the next 18 months with the first of its six aircraft to include a B737-800F and B767-300F due to arrive within the next two months, and to begin operations immediately. ACN’s aircrafts and MEA’s existing Boeing 737-300 converted freighter expand the operational fleet within the region.

Commenting on the strategic alliance, Dr Juman said, “As part of our growth plan, over the past couple of years we looked at and analysed the regional markets to see where the growth is and where the gates are to the global markets. The growth and potential we saw is mainly in the GCC area, Africa and Southeast Asia. Our thought process was to try to link and serve these markets. ACN as the leading freight cargo operator in Southeast Asia was identified as the perfect partner for MAE to expand our services in these markets. We are certain that this partnership will prove fruitful to both companies and the markets that we serve.”

The partnership operations will be under the MENA Cargo brand, the freight cargo subsidiary of MAE. The operations will be fully managed by ACN moving forward as it holds an Air Operator’s Certificate (AOC) in Bahrain which allows for the expansion of routes to the MENA region. ACN shall provide all the necessary support for the operational and strategic growth of the airline in line with its SEA plans.

MENA Cargo was established in 2020 and was awarded an AOC by Bahrain’s Ministry of Transportation and Telecommunications Civil Aviation Affairs (CAA) department in 2021. Bahrain-based MENA Cargo provides scheduled as well as charter air cargo services across underserved markets in the Middle East, South Asia and Africa.

With Bahrain’s tactical location at the crossroads of growing markets on three continents, the ACN-MEA strategic partnership positively contributes to strengthening the kingdom’s positioning as a global logistics nexus. 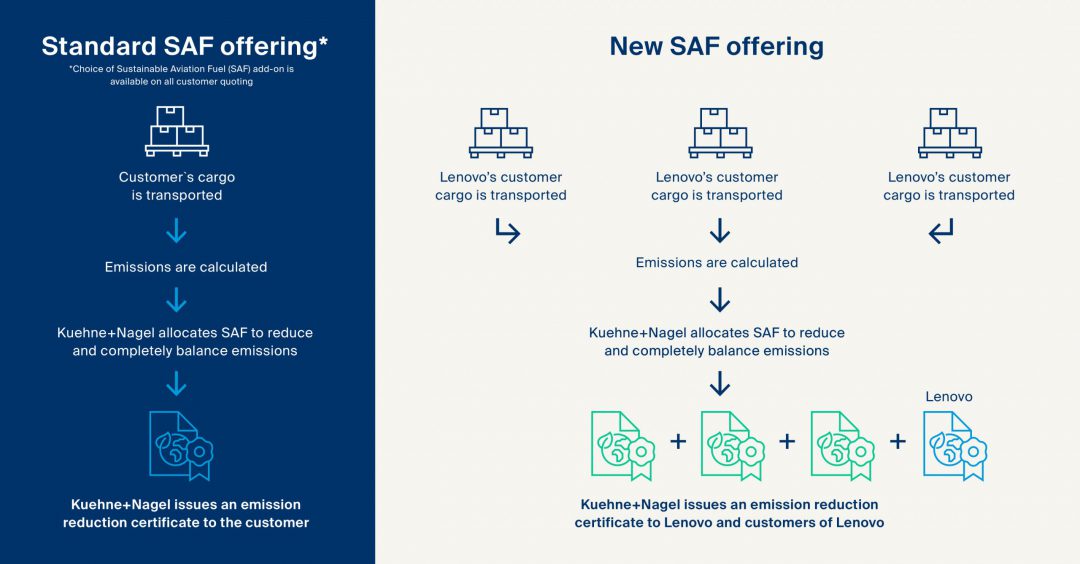 To support enterprises in their commitment to minimise their environmental footprint and combat climate change, Lenovo is joining forces with Kuehne+Nagel to create a first-of-its-kind logistics service in the technology industry. Through a purchase add-on, Lenovo customers can now ship IT equipment and devices with Sustainable Aviation Fuel, a fuel produced from sustainable feedstocks that when used reduces GHG emissions.

SAF is currently the most effective measure to significantly reduce the environmental footprint of air freight. When opting for SAF, Kuehne+Nagel will provide an emission reduction certificate to Lenovo and its customers indicating the amount of SAF litres per purchased device for any trade lane and carrier handling the shipment. This transparency allows customers to reduce their scope 3.1. emissions for purchased goods and services according to the amount of CO2e1 avoided in the transport.

Yngve Ruud, Member of the Management Board of Kuehne+Nagel, responsible for Air Logistics, comments: “Kuehne+Nagel continues to develop easy and value-adding sustainable shipping options for its customers. We are pleased that Lenovo chose our innovative SAF concept which offers emission certificates not only to Lenovo but also to its customers and thus supports all stakeholders across their supply chain in achieving their SBTi2 targets. Now, Lenovo customers can avoid CO2e emissions while shipping air freight regardless of the lane or airline”.

“This innovative approach we have forged with Kuehne+Nagel continues our commitment to delivering sustainable products and solutions. At the same time, we continue to explore, deploy, and champion all opportunities to reduce emissions generated through handling, storage, and transportation of our products,” said Gareth Davies, Head of Global Logistics at Lenovo.

Cargolux and DB Schenker launch an API for quotes and booking 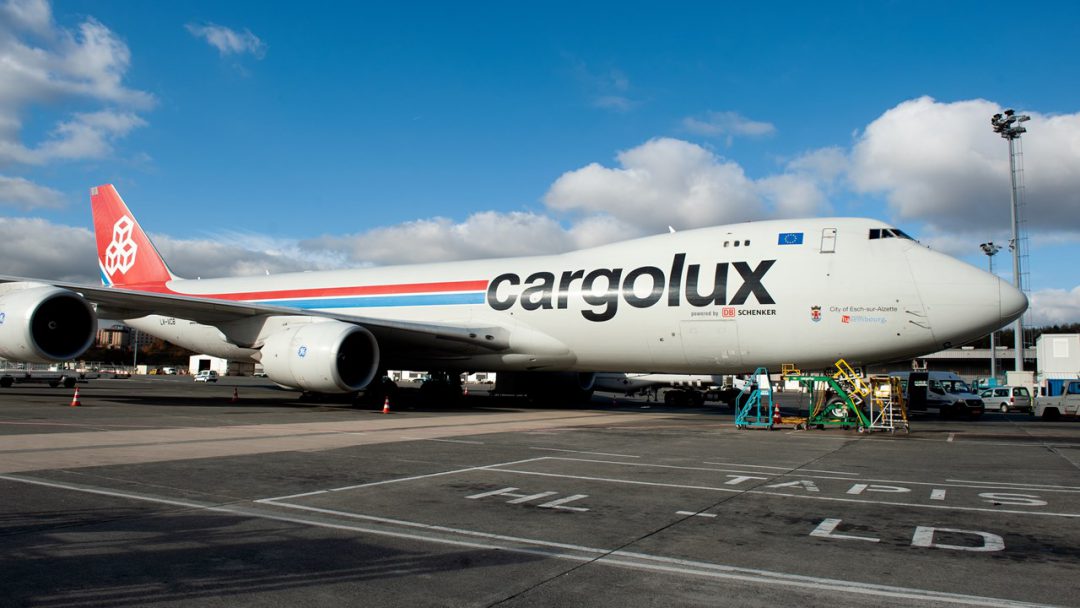 Cargolux and DB Schenker launch an API for quotes and booking. Image: Cargolux

Cargolux and DB Schenker have launched an API providing a direct interface between both companies’ systems to generate tailored and immediate, bookable quotes. Cargolux’s Austria, Spain and Portugal offices were selected to participate in this innovative approach in collaboration with long-standing customer DB Schenker.

The API interface allows DB Schenker to directly connect its operating system to Cargolux’s system to receive quotes and book their freight onboard a Cargolux flight. The interface offers dynamic pricing options based on specific requirements such as weight, routing, and product type.

“The implementation of API offers customers more choice and flexibility when booking their cargo with us. Launching this venture in collaboration with a key customer such as DB Schenker highlights both companies’ wish to pursue digitalization and continue looking for innovative solutions in the industry”, says Domenico Ceci, Executive Vice-President Sales & Marketing.

“The new connectivity will further transform our joint process into the latest technology and is clearly a remarkable milestone of the professional collaboration. This innovation brings benefit to all stakes of our transportation chain through digital proposition and exchange – Cargolux as preferred partner, our global customer base and the entire global Air Freight network of DB Schenker. We are very excited to establish it now globally, says Stefan Spriestersbach, Head of Production Systems, DB Schenker Global Air Freight.

Cargolux is in the midst of an extensive sales transformation project and initiatives such as the API highlight the airline’s commitment to innovation and service excellence. Cargolux is committed to implementing flexible and lean processes to enhance customer experience and contribute to digitalization along the supply chain. By increasing its “speed to market” capabilities, the airline complements its service offering while offering the quality service customers have come to expect. 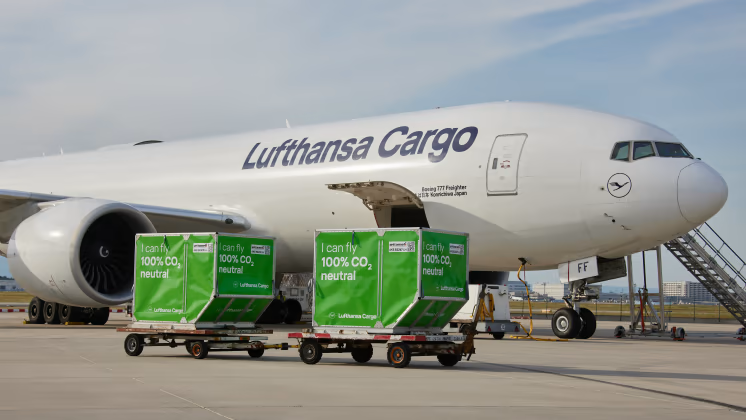 The global logistics market continues to experience turbulent times. Nevertheless, after three years in crisis mode, a normalizing market is in sight. Lufthansa Cargo is optimistic about the year 2023 and is positive about fundamental trends such as digitalization and sustainability as well as the associated challenges in airfreight.

The peak phases of the Covid pandemic clearly demonstrated the importance of air freight in logistics. It is an indispensable component of global supply chains. This made the past crisis years all the more challenging for the industry. The temporary shutdown of many passenger aircraft fleets led to a considerable loss of cargo space, as around half of the world’s air freight tonnage is carried as supplementary cargo. Although there will continue to be strained supply chains, partly due to global dynamics, Lufthansa Cargo nevertheless expects increasing freight capacities to help ease the situation in the coming year. Above all, the continuous increase in passenger flights and the outlook for a reopening Asian market allow us to look to the future with confidence.

“Recent years have shown that global trade is resilient and there continue to be growth markets. Air freight has always been dynamic and volatile. Flexibility is and will continue to be in demand in the future,” said Dorothea von Boxberg, Chairman of the Executive Board and CEO of Lufthansa Cargo. The year 2023 will not require a fundamental change in strategy, but will continue to drive measures already underway and maintain a forward-looking willingness to learn, von Boxberg added.

Digitization and AI as a competitive factor

Across all industries, the pandemic years have led to digitalization being driven forward strongly in many areas. According to Lufthansa Cargo, this will continue in the airfreight sector, and at an accelerated pace. Networking through the intelligent use of data and the increasing automation of processes will become performance and competitive factors for the industry.

“Even before the pandemic, topics like digitalization and AI were important. In air freight, there are still many opportunities to use data to add value and interact with partners in real time. The industry is characterized by the fact that we collaborate very strongly across the board. One example of this is the nationwide research project ‘Digitales Testfeld Air Cargo’ of the German Federal Ministry of Transport (BMVI), which is coordinated by the Fraunhofer Institute for Material Flow and Logistics (IML). We are pleased to be working as a project partner to help position Germany as an air cargo location for international competition in the future,” says Dorothea von Boxberg.

The future of air freight logistics will continue to be driven to a large extent by the issue of sustainability. Today, the industry is already making a diverse contribution to climate protection. In addition to CO2neutrality on the ground, for example through electrification or solar installations, Lufthansa Cargo believes that it will be indispensable to further advance the sustainability of the aircraft as a means of transport, for example through fleet modernization. However, it is also important that regulations on quotas of sustainable fuels (Sustainable Aviation Fuels) are designed to ensure fair competitive conditions. “For us, sustainability is a very special priority. We have set ourselves the ambitious goal of halving our CO2 emissions per kilogram when flying by 2030. Efficient flying and expanding the use of sustainable fuels are the focus,” explains Dorothea von Boxberg. “But to really make a difference, we need to think holistically about the issue and also take smaller measures such as loading equipment optimization and recycling seriously. We are convinced – every contribution counts.”