The CMA CGM Group, a global player in sea, land, air and logistics solutions, and ENGIE, a global leader in low-carbon energy and services, announced plans to co-invest in the Salamander project – the first industrial and commercial unit for second-generation biomethane production – and their intention to produce up to 200,000 tons of renewable gas annually worldwide by 2028, to meet the needs of CMA CGM and the shipping industry.

Majority-owned by ENGIE and the CMA CGM Group, the site is being considered to be located in Le Havre, backed by the support of the Havre Seine Métropole urban community via the investment program “Le Havre, Ville portuaire intelligente”. The unit will be fueled by dry biomass from local wood-waste sources, along with solid recovered fuel, and will produce the biomethane via pyrogasification. The site will aim to produce 11,000 tons of biomethane annually, starting in 2026.

The two groups plan to finalize their investment decision in late 2022. A funding request has been submitted to the European Commission’s Innovation Fund. By developing the renewable gas industry and the Salamander project, both CMA CGM and ENGIE will help achieve the energy independence and energy transition goals set forth by the European Commission in the RepowerEU plan.

The CMA CGM Group and ENGIE have taken this opportunity to state their intention to increase annual production of renewable gas in Europe and worldwide to 200,000 tons by 2028, both to meet CMA CGM’s needs and those of the shipping industry. The Salamander project will help reach that target.

The CMA CGM Group, which aims to achieve net-zero carbon by 2050, already has a fleet of 30 dual-fuel “e-methane ready” ships in operation – a figure that will rise to 77 by the end of 2026.

The dual-fuel engine technology developed by CMA CGM, which currently runs on LNG, is already capable of using bioLNG, as well as synthetic methane. This fuel reduces greenhouse gas emissions by up to 67% compared with Very Low Sulphur Fuel Oil (VLSFO) from well to wake (the complete value chain). Against this backdrop, CMA CGM and ENGIE are pledging their commitment to promoting the development of the renewable gas sector at an industrial scale.

Salamander: local renewable energy and a concrete commitment to the Le Havre region

Salamander is the culmination of both groups’ desire to promote production and distribution sectors for renewable gas in Europe – particularly in France. It is the application on an industrial scale of 10 years of research and development conducted by ENGIE1 within the framework of the GAYA project, which has demonstrated the technical, economic and environmental viability of producing renewable gas.

The Salamander project also reflects CMA CGM’s close-knit connection with the Le Havre region, where the site is being considered. CMA CGM is the largest local maritime company in terms of market share, operating in the region since 1994. Its roots can even be traced back to 1863 as CGM. 15 weekly connections serve the port of Le Havre – an illustration of its strategic importance to the CMA CGM Group – and the local office employs a staff of over 400 employees.

CMA CGM and ENGIE have also been working together for several months within the Coalition for the Energy of the Future, launched at the end of 2019 during the “Assises de l’Economie de la Mer” by Rodolphe Saadé and supported by President of the French Republic, Emmanuel Macron. The two companies continue to work within the Coalition to ramp up the development of the energies and technologies of the future, to support new models of sustainable mobility and reduce the climate impact of transport and logistics.

Christine Cabau Woehrel, Executive Vice President Assets and Operations at CMA CGM said: “To reach our target of net-zero carbon by 2050, the CMA CGM Group is seeking to form solid industrial partnerships, led by this initiative with ENGIE that aims to produce up to 200,000 tons of renewable gas annually by 2028. Salamander is the first industrial ramp-up to emerge from the partnership, an advanced pilot helping to develop the renewable gas sector, in keeping with the goals of energy independence and the energy transition set forth by the European Commission in the RepowerEU plan.”

Edouard Sauvage, Executive Vice President Infrastructure at ENGIE, said: “ENGIE is innovating with a new local production method for second-generation biomethane using wood waste, underpinned by an energy production technology involving pyrogasification. The scale of the project reflects our ambitions and accelerated development in renewable gas production. It demonstrates our ability to support leading companies in their transition to net zero. We are delighted and proud to be carrying out this initiative in partnership with CMA CGM, moving forward together in this important milestone in our efforts to promote the energies of the future”. 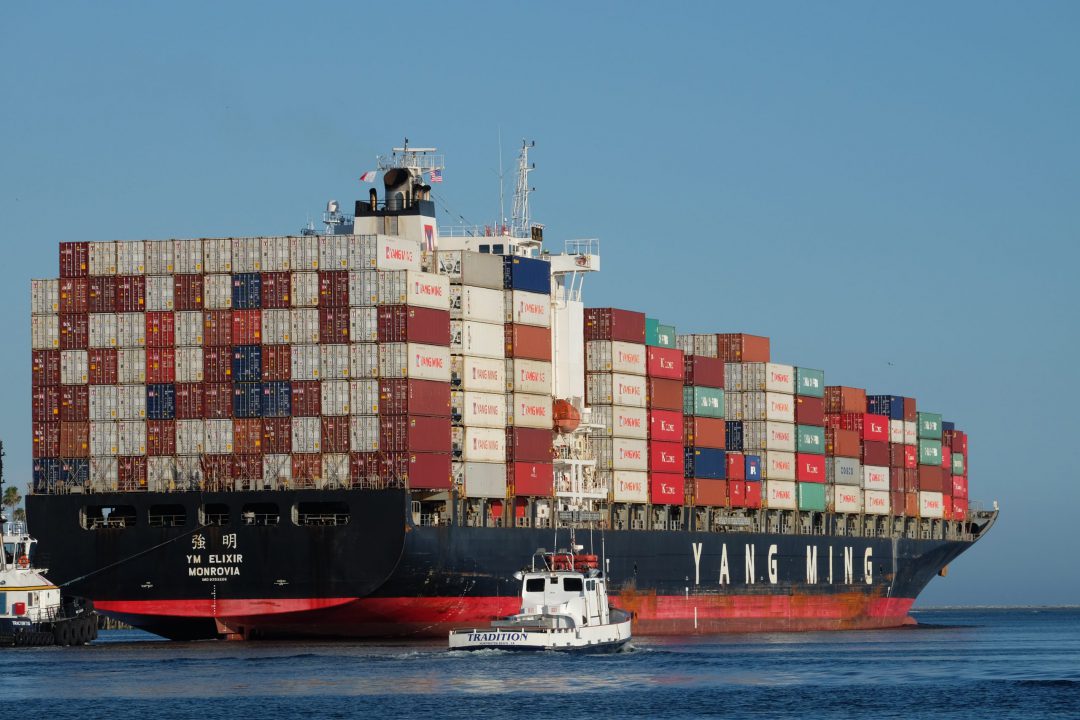 This series of vessels has a nominal capacity of 11,860 TEU and is equipped with 1,000 plugs for reefer containers. With a length of 333.9 meters, a width of 48.4 meters, a draft of 16 meters, these vessels are designed to cruise at a speed up to 23 knots. The containerships incorporate various environmental features including scrubbers, Water Ballast Treatment Plant and Alternative Marine Power system.

This type of vessels adopts the twin-island design to increase loading capacity and navigational visibility to ensure more efficiency and safety. The ship hull form optimization will further increase energy saving and reduce overall emissions. In addition, the ships are designed with shorter length and beam, which makes them easier to maneuver during berthing or departure. The optimal dimensions can enable these ships to call at major ports worldwide and pass through the new Panama Canal with no restriction, and facilitate greater flexibility in vessel deployment.

YM Trillion has been deployed on Yang Ming’s Trans-Pacific service PN3, which will meet customer needs, and maximize capacity utilization. It is expected that the vessel will further strengthen the competitiveness of Yang Ming’s global fleet and service network. 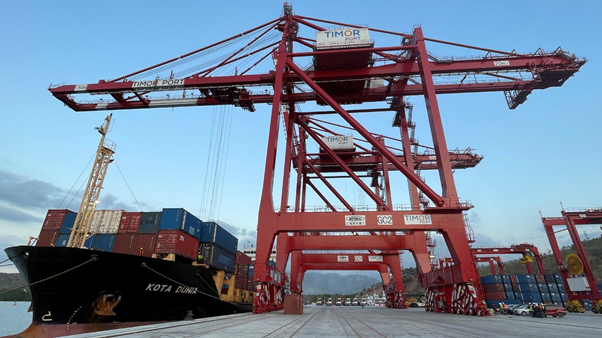 Mariana Express Lines, a subsidiary of Pacific International Lines, announced that two of its vessels Kota Dunia and Selatan Damai, made successful maiden calls at the new Tibar Bay Port over two days to support the operational trials of this new deepwater port. This new development, built in compliance with globally recognised environmental standards, aims to deliver performance and productivity which are comparable with the largest seaports in the world

Over the two-day test phase, the efficiency of the digital operating systems of the terminal shone through as the port handled nearly 1,000 containers on board both ships. With new optimised port call practices, the port call process in future is expected to be even shorter and more efficient, thereby bringing savings while reducing carbon emissions for shipping lines.

Lee Chin Giaf, General Manager, MELL said “MELL has served Timor Leste for over a decade. We are very pleased to have the opportunity to show our commitment to the growth of Timor by deploying two of our vessels to participate in the testing of the country’s new world-class facility. We look forward to working closely with Timor Port and Bolloré Ports on the successful development and launch of the new port as part of its ambition to drive stronger economic growth for the country. ”

Laurent Palayer, CEO of Timor Port SA said “MELL and Bolloré Ports enjoy a long standing relationship underpinned by close co-operation over the last decade and with the opening of Timor Bay, we will further strengthen our partnership to bring economic progress to Timor Leste.”

Tonnie Lim, Chief Trade Officer, PIL added, “Asia is a key focus region for PIL, and our subsidiary MELL enables us to specialise in certain niche routes within Asia Pacific. Timor, with its central location in Asia and proximity to the large Asian market of Indonesia, has immense development potential. PIL and MELL are confident that Timor will continue to grow from strength to strength and we stand ready to meet the needs of our customers for enhanced connectivity to Timor and other parts of Asia.” 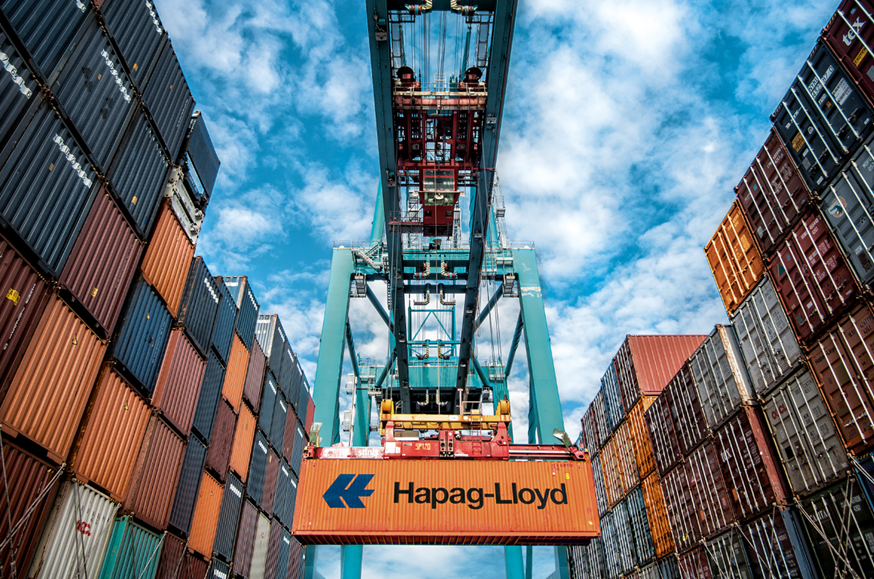 MacGregor, part of Cargotec, has received a significant order for delivering container lashing systems for twelve 23,500+ TEU container vessels for Hapag-Lloyd. The vessels will be built at Daewoo Shipbuilding & Marine Engineering in South Korea.

The order was booked into Cargotec’s 2022 third quarter orders received. The vessels are scheduled to be delivered to the owner between the second quarter of 2023 and the fourth quarter of 2024.

“Cargo system plays a very important role in the efficient operation of the container ship. Hapag-Lloyd and MacGregor have worked together closely and developed the optimum cargo system for this vessel series to ensure the best cargo efficiency. Placing this order with MacGregor was the first choice for us,” says Lutz-Michael Dyck, Senior Director, Strategic Asset Projects, Hapag-Lloyd.

“Hapag-Lloyd is a highly appreciated and strategic customer for MacGregor. Over the years we have worked together closely to find ways to improve the cargo efficiency on existing ships and newbuildings. In this project, we have been collaborating on concept design and cargo system configuration from the very early stages. I am very proud that Hapag-Lloyd trusted us with this order,” says Magnus Sjöberg, Senior Vice President, Merchant Solutions, MacGregor.

Hapag-Lloyd is currently the world’s fifth largest container carrier with 253 container ships totaling a capacity of 1.8 million TEU. Hapag-Lloyd is known for its dedication to efficiency and minimizing environmental impact.

MacGregor is a leader in sustainable maritime cargo and load handling with a strong portfolio of products, services and solutions, all designed to perform with the sea.

Lufthansa Cargo and Kintetsu World Express commit to use SAF