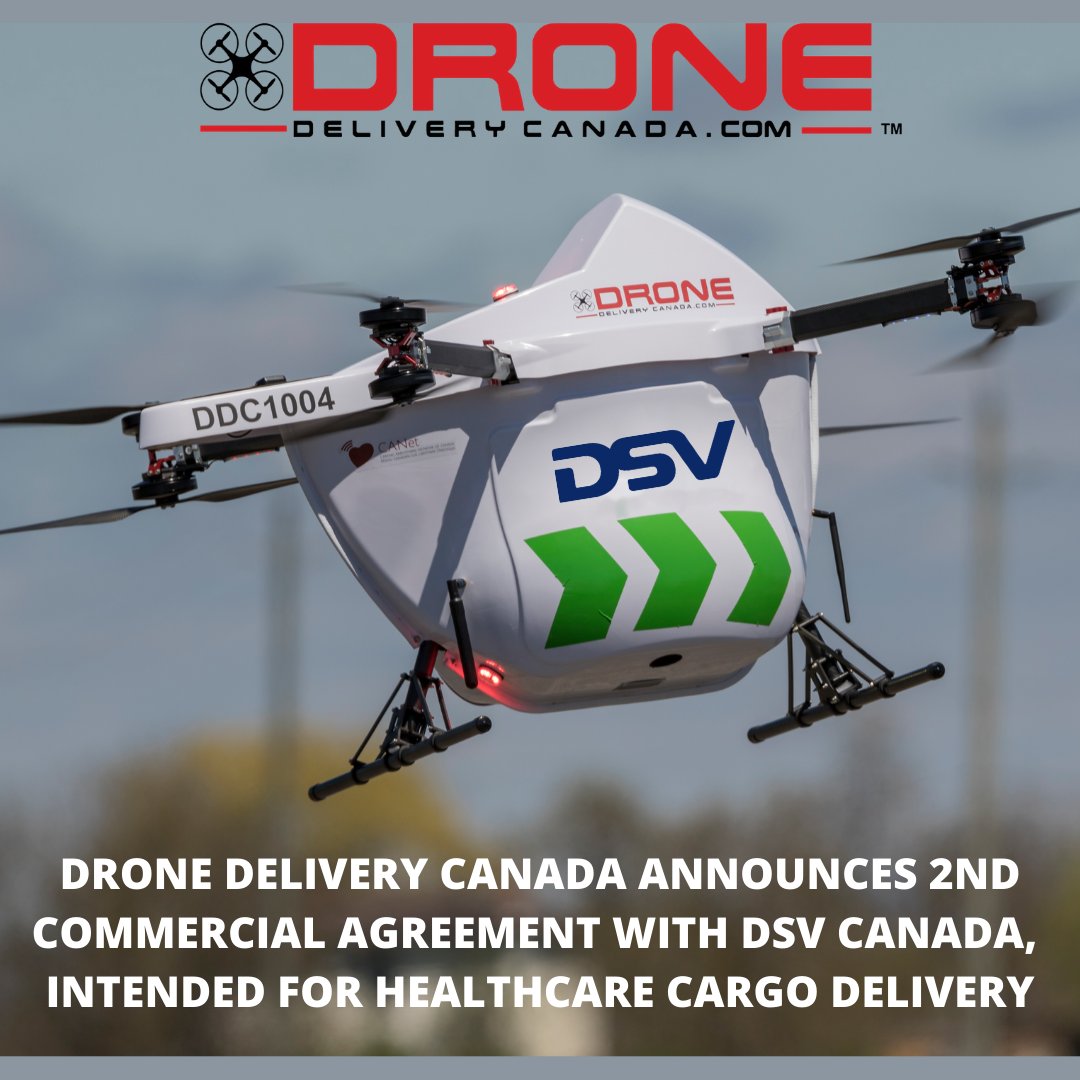 Drone Delivery Canada Corp is pleased to announce that with the assistance of its sales agent Air Canada, it has entered into a commercial agreement with DSV Air & Sea Inc. Canada, the Canadian arm of the global transport and logistics company DSV Panalpina A/S, to deploy DDC’s drone delivery platform, with the intent for DSV to deliver healthcare related cargo from DSV’s warehouse in Milton, Ontario to DSV customers locally.

Pursuant to the terms of the Agreement, DDC will deploy its Sparrow cargo drone, with the cargo drop capability previously announced June 10, 2020. The term of the Agreement is three months, full payment will be made upfront by DSV.

At the destination, the Sparrow will hover at a lowered altitude, drop untethered cargo in a designated area shared by multiple DSV transactional customers, then return to DSV’s DroneSpot. The route is approximately 3.5km.  Flights will be remotely monitored by DDC from its Operations Control Centre located in Vaughan, Ontario.  DDC will commence implementation of the solution in Q3 2020 and expects to begin providing drone delivery services under the Agreement in the same quarter, with the potential of more additional routes being added in 2020.  All operations will be conducted in accordance with the Canadian Aviation Regulations and Transport Canada flight authorizations.

“We are currently flying hundreds of successful flights per month at DSV for their first route, and we are pleased to announce a second paid route with DSV.  DSV is a global leader in the logistics space and a perfect fit as a scalable customer for us,” said Michael Zahra, President & CEO of DDC.  “DSV will use our proven Sparrow drone with the new cargo drop functionality, patented FLYTETM system, and commercial operations centre.  It’s very fulfilling to DDC to provide DSV a solution to help deliver important healthcare related cargo given the current situation.”

“During this critical time, we have helped many of our clients find new ways of delivering cargo. In order to keep goods flowing through the supply chain, innovative solutions are key to embrace. Drone delivery provides an answer to many of the challenges we’ve seen during the current situation,”  says Martin Roos, Managing Director of DSV Air & Sea Canada. “Our partnership with DDC and Air Canada Cargo provides the opportunity to fulfill our clients’ needs, ensuring time sensitive, critical cargo can be delivered locally with accuracy, efficiency and minimal person-to-person contact.  We are excited to optimize our clients’ supply chains and are now exploring the true potential of drone innovation.”

​This agreement ensures that the production of the DRONAMICS’ cargo drones supports the demand for the commercial routes to be launched in Europe in 2023. ​DRONAMICS recently became the first drone cargo company to obtain a European drone airline license.

“We are delighted to have Cotesa as a manufacturing partner in Europe. This agreement to produce the Black Swan in their German facility supports our promise to enable same day delivery for everyone, everywhere, and the start of DRONAMICS’ commercial operations as the first drone cargo airline on the continent next year.” said Svilen Rangelov, Co-Founder and CEO of DRONAMICS.

“COTESA is proud to be a partner of Dronamics and support the next step of the development of their offering. Based on our long experience and competence in the manufacturing of components and assemblies for civil aviation, COTESA is excited to partner with such an innovator in the air mobility space.” commented Christian Bartsch, CEO of COTESA. 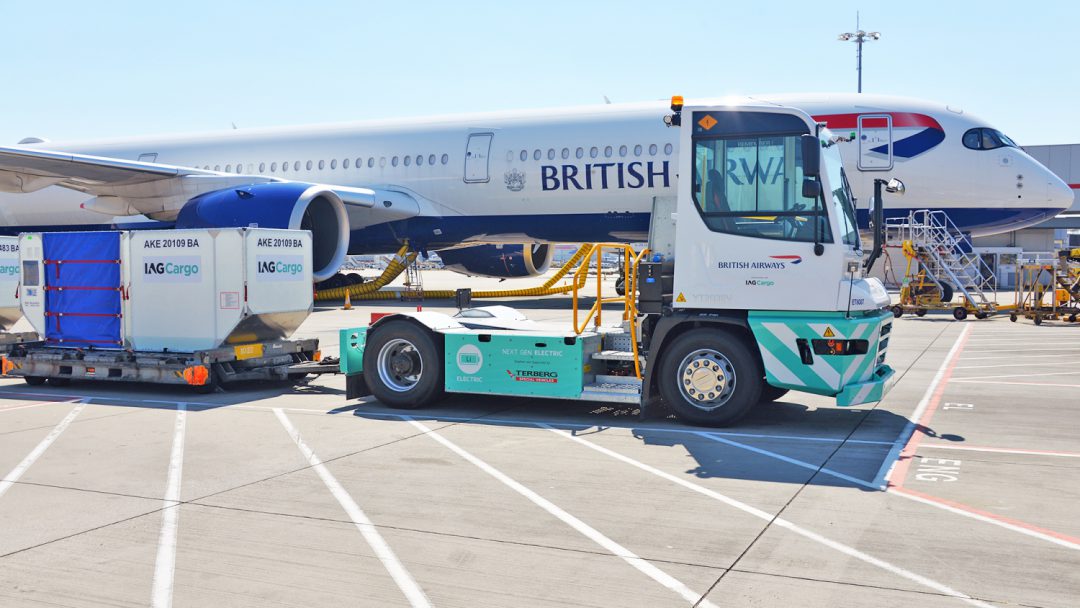 IAG Cargo, the cargo division of International Airlines Group has begun to trial the first electric terminal tractor, known as a Terberg YT203EV, at London Heathrow airport. This is the first electric Terberg operating airside worldwide.

By replacing an existing terminal tractor with an electric Terberg, approximately 30 tonnes of CO2 will be saved per vehicle per year – this is the equivalent of planting over 1,250 trees or taking over 7 cars off the road.

Terberg has been creating electric vehicles since 2014 with the team constantly revising the designs. The latest vehicles can deliver the same capability as the current diesel units in a more environmentally sustainable way, allowing drivers to carry out their work pattern whilst avoiding diesel engine emissions.

In addition to its electric solution, Terberg are also exploring the development of hydrogen fuel cell vehicles, having placed a unit in to test on an off airfield application. This additional environmentally friendly solution will afford Terberg customers such as IAG Cargo further options to achieve their environmental goals.

IAG Cargo are trialling the electric Terberg YT203EV for 12 months, with the ambition to transition its current diesel fleet to more sustainable alternatives, including electric. In the coming years the trial will help IAG Cargo and its partners understand the challenges the business may face when adopting an electric airside fleet, how future electric vehicles could be charged and what additional infrastructure will be needed to support a fleet of electric terminal tractors.

David Rose, Chief Transformation Officer at IAG Cargo commented: “We’re delighted to be partnering with Terberg to trial the first electric Terberg at London Heathrow – this is an exciting advancement for IAG Cargo as we strive to lead on sustainability and be fit for future.

We are continuously looking at ways that reduce our impact on the environment whilst improving our customer offering. This trial is part of a wider effort supporting our commitment to making IAG Cargo, and the wider industry, more sustainable.”

Alisdair Couper, Manager Director at Terberg added: “This is another step towards reducing air cargo’s impact on the environment and so we’re thrilled to work with IAG Cargo to see the first electric Terberg already in action at London Heathrow airport.” 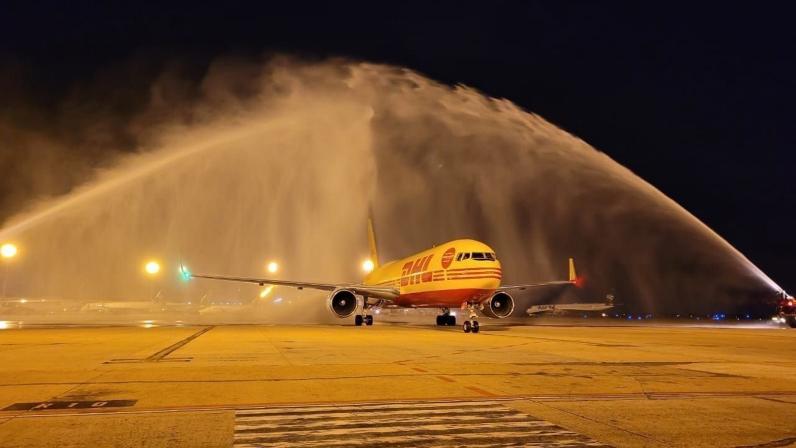 DHL Express starts a new route of cargo flight between US and Brazil. Image: DHL

DHL Express, the world’s leading international express service provider, expanded its air network by operating its first, dedicated cargo flight between the United States and the Brazilian market. The new route, operated by Cargojet, responds to the increasing international shipping needs between Brazil and the U.S.

“During the past few years, we’ve witnessed unprecedented shipping demand from our customers in the Americas, in both the B2C and B2B segments,” said Mike Parra, CEO of DHL Express Americas. “This network upgrade along the U.S. – Brazil trade lane represents a huge opportunity for importers and exporters to grow their global businesses while receiving unparalleled levels of speed to key markets within the Americas region.”

With a 52-ton capacity per flight, the Boeing 767-300F aircraft will complete the MIA–VCP–BOG–MIA route 6-times a week, connecting Brazil to the DHL Express network with a dedicated flight, which arrives at Viracopos Airport, in Campinas, Sao Paulo. Due to its increased capacity of approx. 620 tons per week, DHL Express expects to improve transit times and offer highly reliable transportation to Brazil and Colombia throughout the year, without a dependency on commercial airlift during peak periods.

The new connection to Brazil is part of DHL Express’ overall expansion plan in the Americas, which includes more than USD $360 million in investments between 2020 and 2022. The company continues to expand its air cargo capacity to cater to rising shipment demand resulting in particular from the e-commerce sector.

This year alone, the company has introduced several new routes, including to and from Vietnam and the United States as bilateral trade increased, adding 102 tons of additional capacity per flight; a new route between Japan and the United States, also in response to the increasing international shipping needs between these two countries, adding 102 tons of additional capacity per flight, six times per week. In late 2021, DHL also introduced a new route connecting Chile directly from the United States, which added more than 600 tons of capacity of cargo per week to the DHL network.