The United States and Italy have become the first and second leading countries in trade relations with Valenciaport worldwide. As reflected in the data of the Statistical Bulletin of the Port Authority of Valencia for the month of July, in the first seven months of the year, the North American ports have mobilised 5,523,420 tonnes, which represents a growth of 22.47%, highlighting the increase in the import of US products, by more than 215%.

For its part, Italy has become Valenciaport’s second largest trading partner with 4,672,967 tonnes of goods handled and an increase of 3.5% compared to the same period the previous year. Between 1 January and 31 July, the situation of the Asian market has left China with less weight, with a total traffic volume of 3,664,901 tonnes, accumulating a decrease of 8.35% compared to the same period last year.

By sectors, the United States is the main supplier of natural gas, which has made the energy sector the most dynamic in Valenciaport’s freight traffic: this sector has transported more than 2.8 million tonnes in the first seven months of the year, 113.65% more than in the same period last year. In fact, according to data from the APV’s Statistical Bulletin, natural gas entering the Port of Sagunto has tripled the total for this energy source, rising from 736,215 tonnes in 2021 to 2,220,915 in 2022.

The United States ports handled 1,382,302 tonnes of natural gas goods with Valenciaport, which means 62% of the total natural gas entering or leaving through the APV. By sectors, the main products moved between Valenciaport and the USA are construction materials (968,248 tonnes), wines, beverages, spirits and derivatives (375,867 tonnes) and chemical products (346,177 tonnes).

Goods traffic between Italy and Valenciaport is concentrated on vehicles and transport elements: so far this year, 602,572 tonnes of road traffic and 429,146 tonnes of automobiles and their parts have been handled. In total, between January and July, Valenciaport has handled 6,967,047 tonnes related to vehicles and transport elements, +2.73% more than the accumulated figure for the previous year.

Other outstanding products in relations with Italian ports are wines, beverages, alcohols and derivatives (558,755 tonnes) and chemical products (330,765 tonnes).

China maintains its leadership in TEUs

The global economic and geopolitical situation is reducing traffic

The APV’s Statistical Bulletin for the first seven months of the year reflects an economic scenario marked by uncertainty, the rise in fuel prices, the distortion of raw material prices and rising inflation, as is the case in other ports of the same name.

If we analyse the data for July, it can be seen that after two months of growth, the full containers of cargo (export) have decreased by 0.67% and those of unloading (import) continue to be positive, adding 3.04%. The biggest fall was in transit containers, down 19.9%. With regard to empty containers, the overall figure reflects a decrease of 4.66%. In total, TEUs stood at 443,159 in July, 9.33% less than the previous month. Something similar occurs with the total amount of goods handled, which reached 6,911,786, 2.47% less than in the same month of the previous year.

The same situation is reflected in the accumulated data for the year. Between January and July, Valenciaport has mobilised a total of 48,379,923 tonnes, 2.32% less than the same period in 2021. This situation particularly affects containerised cargo, which fell by 8.20%, while liquid and solid bulk cargo grew by 81.35% and 2.83% respectively. On the other hand, non-containerised cargo increased by 5.78%.

During these first seven months of the year, it is worth highlighting the activity of ro-ro traffic, which has grown by 4.45% and accumulated 7,803,662 tonnes. The number of Intermodal Transport Units increased by 7.31%, while the number of cars in cargo regime increased by 12.88% to 346,571 units.

As a consequence of the current situation – apart from the energy sector and the vehicles and transport elements sector, which have increased sales abroad by 87.24% and 1% respectively – the APV Statistical Bulletin for the first seven months of 2022 reflects a general increase in imports and a decline in exports.

Another of the conclusions of the APV Bulletin is the recovery of passenger traffic. The Valenciaport docks have received 664,400 passengers between January and July of this year, which is three times the number of passengers than in 2021. Of these 249,261 are cruise passengers, a third of the total.

In year-on-year terms, between August 2022 to July 2021, the figures also show the reactivation after the standstill caused by the pandemic restrictions: thanks to the APV, Valencia has welcomed 1,062,295 passengers.

Container traffic at the Port of Valencia falls by 7% in 2022. Image: Port Authority of Valencia

Valenciaport, as a thermometer of economic activity and world trade, reflects in its 2022 data the international crisis that is affecting the business situation and the global exchange of goods, which is facing a complex situation marked by the war in Ukraine, increased neo-protectionism, high inflation and the rise in fuel and raw material prices. Despite the fall in total traffic (-6.92%) and container traffic (-9.85%) during the previous year, Valenciaport maintains its share of 40% of import/export traffic in the Spanish port system, as in previous years. The year closed with an increase in the number of cars handled, which rose by 22.25%, and passengers, both on regular lines (+48.67%) and cruise passengers (+376%).

About the type of goods, the current situation is a clear reflection of Valenciaport’s traffic and the change in the arrival/departure of products. Thus, liquid bulk has mobilised 5,818,821 tonnes (+50.44%), highlighting the natural gas that has been managed through the Port of Sagunto, which has doubled in 2022 compared to 2021 to reach 4,118,575 tonnes. In fact, the number of ships dedicated to the transport of products such as energy products was 322, 10.65% more than the previous year. The United States accounts for half of all natural gas imports. Solid bulk cargoes exceeded 2,255,164 tonnes, up 4.45%, with an increase of 12.14% in cereals and their flours. Non-containerised cargo maintained the 2021 quota with 14,763,010 tonnes, while the decrease occurred in containerised cargo with 56,125,555 tonnes, 12.33% less.

About automobile traffic, during 2022 it should be noted that 603,566 units were handled at the València and Sagunto docks, a 22.25% increase. In absolute figures, 109,869 more vehicles were handled than in 2021. This vehicle traffic is mainly with Italy, Belgium and Turkey, which account for 50% of operations. In terms of ro-ro traffic (a system whereby a vessel transports cargo on wheels), total traffic amounted to 12,946,088 tonnes, 0.64% more than in 2021.

The United States, Italy and China, the main partners 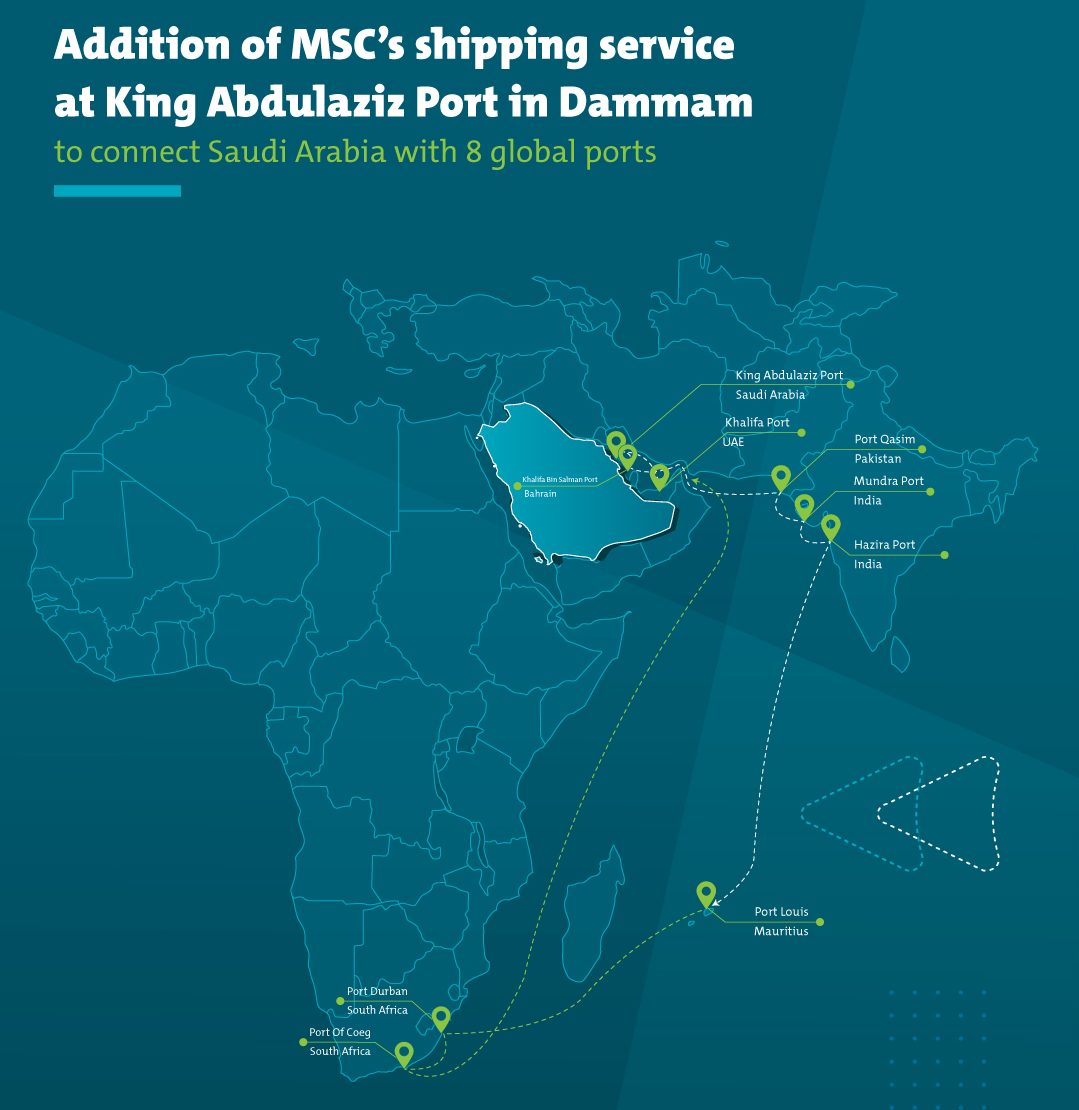 The Saudi Ports Authority has announced the addition of King Abdulaziz Port to a new freight service operated by Swiss-based container group MSC.

The latest connection is set to bolster the Dammam based port as a focal point for regional and global trade while strengthening the Kingdom’s hub credentials in fulfilment of the ambitions of the National Transport and Logistics Strategy.

The capital of the Kingdom’s Eastern Province will enjoy weekly sailings to eight maritime destinations spanning the Arabian Gulf, South Asia, and Southern Africa. They include the ports of Khalifa bin Salman in Bahrain, Khalifa in UAE, Qasim in Pakistan, Mundra and Hazira in India, Port Louis in Mauritius, and Durban and Coega in South Africa. The service, which started on 21st January, will feature five vessels with an average carrying capacity exceeding 6000 TEUs.

Developing the Kingdom’s industrial capabilities to fulfill the objectives of the National Transport Strategy in line with Saudi Vision 2030, has and will always be one of Mawani’s main objectives, thus contributing to making Saudi Arabia a pioneer in the ports sector. 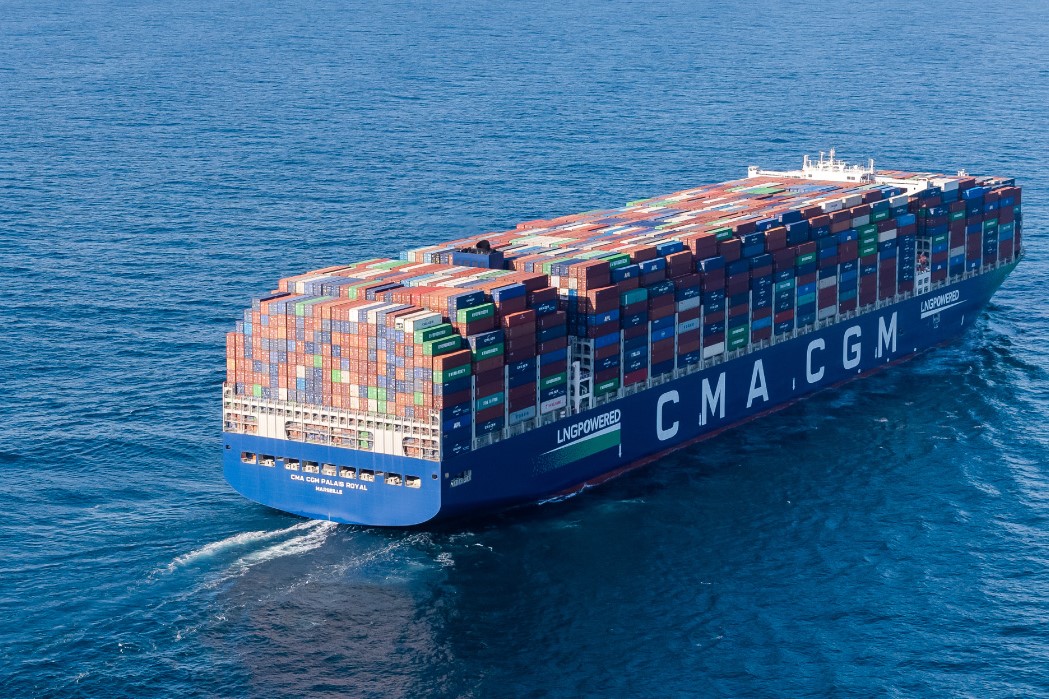